So here it is my test of the new PX100 film from Impossible Project.

But first a few declarations at the outset, in the attempt to keep this fair.

I, Kevin Mason, am a Polaroid addict, there is little better than shooting portraits on an sx70 with a pack of scarce but reliable 600 film. (You should be able to view some of my old Polaroids here)

I have been excited ever since I first heard about the Impossible Project and I really want it to succeed, produce viable films at a price that is reasonable.

I have not performed this test under any strict conditions, but following a few bits of general advice I have shot this as I would normally use my SX70. (The lens still had a 1ND filter over it on all but one of the shots).

I shoot Polaroids for both Commercial work and Personal work- both of which put very different demands on both the photographer and the film.

I paid £19.99 for this pack of 8 exposures at The Photographers Gallery London, its cheaper online if you can buy bulk.

I am not attempting to solve these clear image problems, but just to shoot with a fresh pack and see what I get. (E.g I am sure gels etc could fix some of these issues).

I really couldnt at this point give a damn about fancy packaging, collectable dark slides or the almost lomographic fetishism that this project is being marketed as, I just want a film I can use with a certain amount of creative control.

I shot all the tests in the street outside the studio, in natural light, varying between shade, sunny, into the sun etc. Just like in one of my regular Polaroid 600 shots of Georgie below, who I shot in all 8 of the images.

The biggest change to report with this film, is that Impossible have released a product so unstable that you have to hide it from any light as its developing. In other words the film isnt instant, you cant watch your picture appear and more importantly you cant selectively burn in areas with a lighter etc as many Polaroid shooters (including myself) do now, to have more control over the image. It also means you must eject the image into a dark bag, or under the dark slide (taped to the front of the camera) and is both fiddly and inhibiting.

The film is also incredibly sensitive to temperature and needs to be kept warm, but not put under pressure, so even sticking it in a pocket may radically mark the image. Doesnt like light, and hates cold temperatures, well in the UK this films seems hugely impractical so far. The biggest joy of the whole process, watching the image appear, has been sacrificed, but I understand this is a new film and maybe the returns will be greater for it….

Shooting this film is a slow process you’ll need to wait a good 3 minutes or so for the image to fix, and then you can check the shot, adjust any exposure etc and shoot again. Its disruptive, plus in the general cold of the UK, shooting outside, even with a cold clip seems even slower. The film itself is wildly, and I dont use that term loosely, unpredictable- to the point that there is NO consistency in the shots that developed, regardless of the lighting conditions, temperature etc. If a film is this tempremental it rules it out for any commercial work at all, a client would not put up with the differing results- as it reduces the photographer to just a ‘hit and hope’ role.

So some general points- Although I understand this is an ‘artistic’ film, Impossible have deemed it fit for release and not at a test product price, but a full price that is considerably more than pro commercial film. So I am looking at it in terms both of its art product use, and its commercial use, or more importantly an outcome that can be predicted.

The film clearly isnt Black and White, varying between sepia and some reds/greens in between.
It seems to have an extremely high number of flaws (dark spots etc).
It switches between massively overexposed and a solarised effect.

These are straight scans with some Levels correct (same for each). 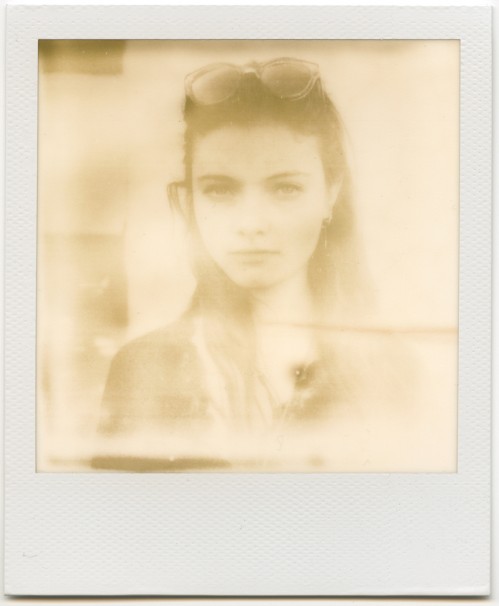 The background in this shot, about 2 foot from the subject is dark grey, the fur she is wearing is black, and this was shot in the shade, about 4pm, with a 1ND over the lens. 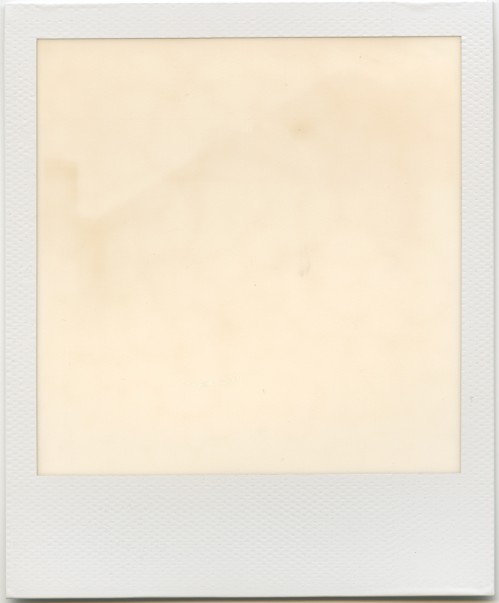 Shot into the sun, with subject blocking the sun, attempting to get some flare etc, its a weak afternoon UK sun. I can just make out the building behind the subject but nothing else. 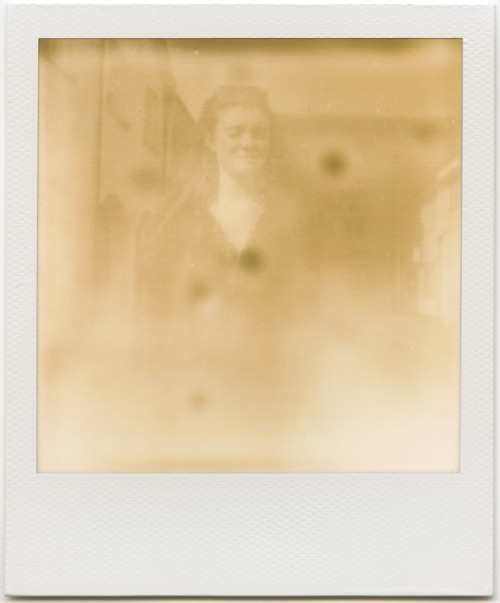 Shot with the sun behind me, ND filter still over lens. 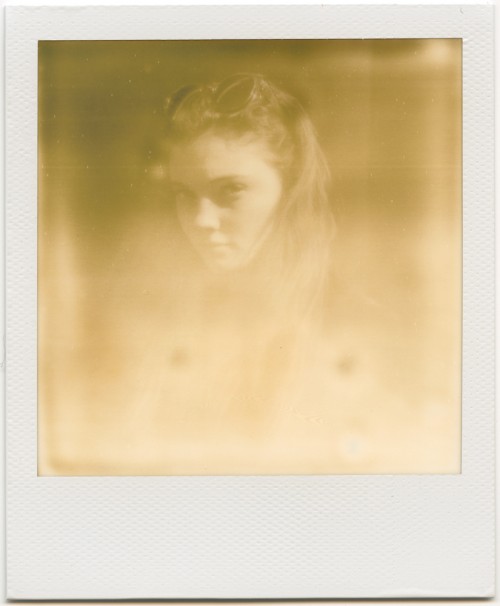 Probably the best tonal range, but one of the most ‘unreadable’ images- shot in shade, with highlight from the sun just catching left of Georgies face. 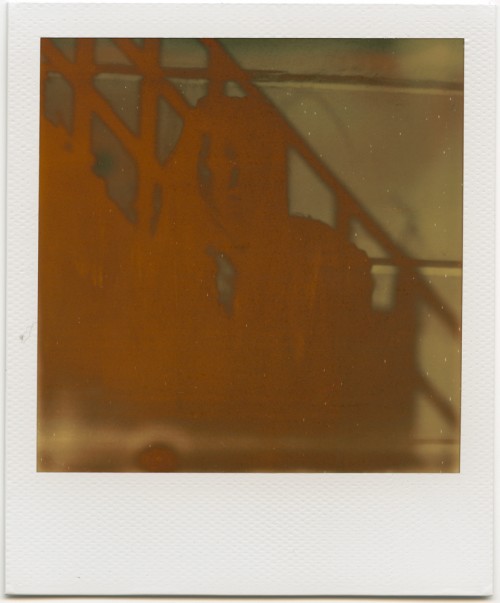 The most worrying image- shot against a white wall, with strong shadow from left to right, of some fencing, the blacks are a deep red, the subject has disappeared, the image appears solarised? 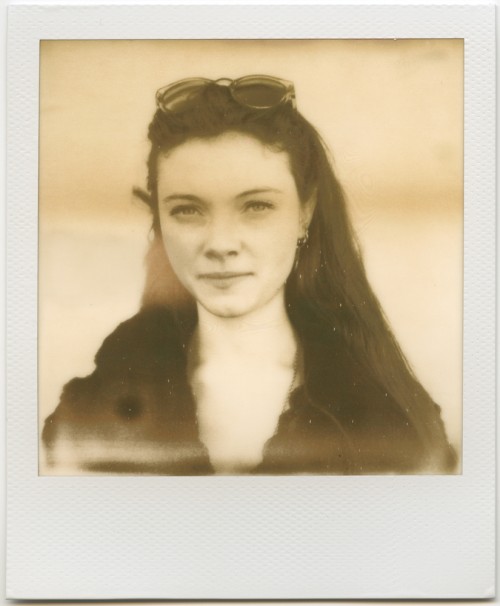 Against Grey, in the shade. 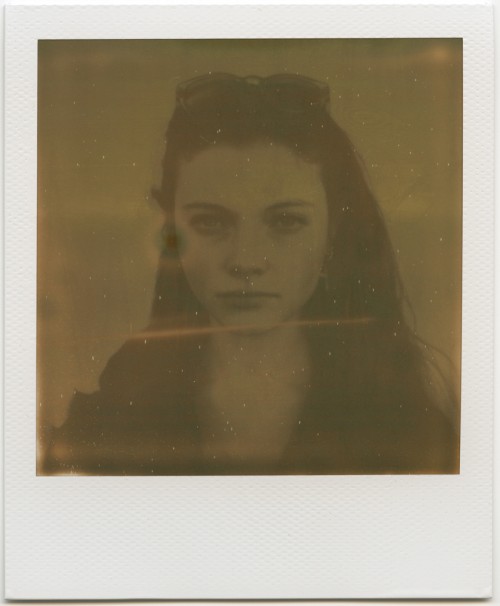 Against Grey, in the shade.

Now the last two shots are the best in terms of clarity, one was shot with the ND filter over then lens, the other wasnt, but as they both went into the bag one after each other I am not sure which is the one without the ND, normally I’d hazard a guess but with 8 wildly differing shots as these from one pack it hardly seems worth it to work it out.

This film has some fantastic qualities and another long period of testing and refining may make it into something great, but right now Impossible Project are way back at the beginning of Photography. This film is wild, you cant expect to just put it into an SX70 and shoot, no matter how many years of other Polaroid films you have. If you buy this film then you’ll find yourself changing the way you shoot- fine if you shoot for fun, and have money to burn. For a specific Project or Commercial work, like when we photographed these compression socks from comprogear or did the photography for the article "Carbon Steel vs Cast Iron Cooking Appliances", at this point I’d say its almost unuseable, you may get some great shots, but it feels almost completely out of your hands- not something I’d be happy pitching to a client.

It feels rushed, and the dire instructions on the Impossible site (below) only seem to emphasise that point, and if Impossible have any respect for their market they will revise these instructions immediately with actual workable tips/advice from pros, packing gels into the box maybe instead of a ‘collectable’ ie gimmicky dark slide, and also offering a return on their product if you arent happy with it.

Sit down in your favorite chair in your favorite room at ROOM TEMPERATURE (17-24°C / 63-75°F)
Put the PX 100 Film into your camera
Put the lighten/darken wheel to MIDDLE SETTING
Hold camera STABLE, especially at low light levels
Make the first MAGIC SHOT
IMMEDIATELY SHIELD PICTURE FROM LIGHT (cover with your hand)
Develop the picture UPSIDE DOWN FOR 60 - 90 SECONDS
Take another deep breath, turn over, and inhale your FIRST PX 100 SHOT

Did I mention it costs £19.99 for 8 shots, I did, well just remember that, and go read the above again, this is their customer service advice……

Its an admirable start from nothing though and may breathe life into these cameras again, but if you want a truly instant film, save your money right now and get old stock 600 film, or even an Instax camera. If you want reliable almost instant shots, then buy a pack film camera and use the great range from Fuji. Impossible need to change their pricing, be completely upfront about this being an experiment and not a viable film yet. If you want to throw your money into the wind then invest in a few packs of this PX100, you may fall in love or you may just find that you been cheated.